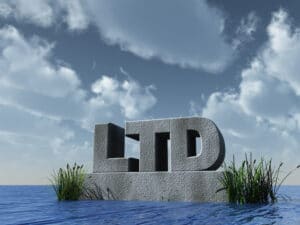 During 2020 we have seen the rate of liquidations skyrocket in the UK, as the vast majority of businesses have struggled with the financial demands and strains of the Coronavirus pandemic. As the process is becoming much more common in this country, we thought we’d walk you through it, while also letting you know what it shouldn’t be mistaken for.

Throughout the UK, bankruptcy is often mixed up with company liquidation through a lack of understanding. These terms can indeed become quite confusing for people in the business world, but knowing the differences between them is always helpful. To make things a little bit simpler, we put it like this: The term ‘bankruptcy’ can only be applied to individuals, such as soul traders and members of partnerships. Whereas, for a limited company in the UK, the process of liquidation would be the equivalent of company bankruptcy.

Company bankruptcy is known as liquidation here in the UK

If you’ve ever heard about companies going bankrupt, you’ve likely heard stories of business firms located in the United States of America. Here in the UK, this is known as the liquidation process, which is becoming more common as time goes on with the COVID-19 pandemic still at large.

A business cannot go bankrupt in the UK, instead it goes into liquidation. Creditors Voluntary Liquidation (CVL)is by far the most common form of insolvent liquidation in this country. When people talk about liquidation, they usually mean a CVL.

Once the directors and the shareholders of a company have decided to pursue a CVL, an insolvency practitioner will be engaged and a meeting of the company’s creditors is called. At the meeting, the creditors get the chance to approve the decision – hence the term ‘creditors’ voluntary liquidation’.

The insolvency practitioner or IP will oversee the process and ensure all the rules and regulations are adhered to. They effectively take over the role of the directors to finalise the affairs of the company.

Once all the assets have been sold off and the process has been completed, the company is dissolved and removed from the Companies House Register.

What happens to directors during liquidation?

Once it has been discovered that their respective company is insolvent, directors should act quickly and be sure that they are not faced with accusations or wrongful trading. A company cannot continue to trade while insolvent. When a director decides to travel down the CVL route, they give themselves more control over proceedings than if they’d simply been forced into compulsory liquidation. In this scenario, creditor pressure will mostly cease to exist, making it an ideal outcome for directors of a company. Just as long as the directors haven’t partaken in any forms of wrongful trading, and the company hasn’t traded whilst in an insolvent state, they’ll be removed of all responsibility once the liquidation reaches completion.

What comes after liquidation?

All remaining company debts will be written off and fully removed once the liquidation process reaches its conclusion. It is also worth noting that as long as directors have acted lawfully throughout the proceedings, they can begin a new company if they wish to do so. Although, they must not use the same trading name.

As a business owner, there are many things you can start doing to try and avoid the liquidation of your company if you believe things are heading that way. You can attempt to prevent company liquidation by taking a wide variety of actions, such as restructuring your finances, paying off any debts the business has built up and more.

You could even try other proceedings, such as the administration process. Administration is usually a voluntary process, decided upon by the business owner when experiencing financial difficulties within their company.  Though, this doesn’t indicate that administration is a long-term solution, it normally isn’t. Instead, it often helps to open the door to further options and different future avenues that can be travelled down for a business on the ropes.

Administration can still mark the beginning of the end of your business if it is found to not be a viable entity by administrators. But, at the same time it can also work out to be a positive process and one that helps to develop your company going forward. This is because it can help to restructure your business model where it most needs it, allowing you to make the changes you need in order for your business to succeed.

We can offer you the help you need

Here at Business Insolvency Helpline have professional contacts with over fifty alternative lenders across Britain. This helps us to offer support in sourcing and applying for that all-important additional funding. That’ll help you to pay your bills on time for example, something that is vital if HMRC is involved, as they have the ability to act fast in recovering arrears of tax, VAT, and National Insurance. Another thing we can offer you is the ability to actually negotiate with HMRC, potentially allowing you some extra time to make payments.

If your company is insolvent and facing serious threats from creditors, a licensed insolvency practitioner can be appointed by the court as an administrator. This protects the company from creditor claims and legal action, allowing the business to be restructured or prepared for sale.