Administrators called in for Go Outdoors 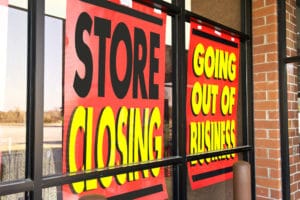 The owners of Go Outdoors have said they are preparing to call in administrators, as the coronavirus pandemic pushes many High Street retailers to an unfortunate financial point of no return.

You may not have previously known, but JD Sports owns Go Outdoors, and they said in a statement it had looked at the options for the business and had decided to start the administration process.

Go Outdoors currently employs around 2,400 staff across almost 70 shops, specialising in camping equipment, bikes and outdoor clothing. Though, the coronavirus pandemic, which lead to the UK going into lockdown, has put an ever-increasing amount of pressure on the firm.

JD Sports group, which is based in Manchester, purchased Go Outdoors in 2016 in a deal worth roughly £112m. But since then the chain has been facing difficulties, particularly in recent years, and forced store closures under the coronavirus lockdown have further advanced those problems. The company said it had filed a notice of its intention in court, a move that protects the company from legal action and its creditors for ten days while an administrator is found.

Representatives have made an effort to appoint an administrator quickly with an accountancy firm named Deloitte. They been appointed to conduct this whole procedure, which could see the company face a complete restructuring. Go Outdoors’ administration process will be similar to many other business’; even small independent companies have to go through a like-for-like journey at a time such as this.

Go Outdoors has been acquired out of administration in a pre-pack deal by its former and now current owner JD Sports. A fundamental restructuring of the retailer has been deemed necessary with coronavirus having forced the closure of its 67 stores across the country.

Statements from JD Sports explain that one effect of the enforced COVID-19 shutdown was “bringing into sharper focus the operating costs of the business”, with a particular issue being its “extremely inflexible” property leases.

Those leases are said to have entailed “upwards only” rent reviews, which contributed to JD Sports taking the view that it would need to fundamentally overhaul Go Outdoors in order to justify retaining it as part of its wider group.

Advisers were appointed to support the process of Go Outdoors potentially being sold in May but it was subsequently decided that a pre-pack administration deal would be the best route forward.

A consideration of £56.5 million has been paid by JD Sports to reacquire Go Outdoors, with plans in place to see the employment of more than 2,000 staff of the business transferred alongside ownership of its assets.

JD Sports has said “it is the group’s intention to retain the majority of Go’s retail estate and preserve as many job as possible”.

Go Outdoors primarily sells fishing, camping and cycling equipment across its 67 outlets in the UK and via its online presence.

Retail businesses were already faced with a tough operating environment prior to the coronavirus crisis but the COVID-19 lockdown has heaped further financial pressures on to the sector in recent months.

Peter Cowgill, JD Sports’ executive chairman, said in a statement: “As a consequence of COVID-19, Go Outdoors was no longer viable as previously structured and would have absorbed capital at an unsustainable rate for the foreseeable future.

“Having investigated all available options for the business, we firmly believe that this restructuring will provide Go Outdoors with a platform from which it can progress whilst remaining a member of the group.

In the case of Go Outdoors, JD Sports said it considered potential options for the chain, which has 67 stores nationwide, in May, including a potential sale – but ultimately determined that the business had a potential future within the wider group, “if fundamentally restructured.” While for the meantime JD Sports said it will “preserve as many jobs as possible” at Go Outdoors, it will now push forward with a major restructuring of Go Outdoors. The firm confirmed that it intends to “retain the majority” of its retail stores across the country – though that statement does notably make room for some closures and job losses in the future.

Peter Cowgill, Executive Chairman of JD Sports, said, “Having investigated all available options for the business, we firmly believe that this restructuring will provide Go Outdoors with a platform from which it can progress whilst remaining a member of the group. Most importantly, we are pleased that it will protect the maximum number of jobs possible.”

The struggles lockdown has provided

While non-essential retailers have since been allowed to reopen in Northern Ireland and England, analysts have questioned how comfortable customers will feel returning to the shops.

Compared with the same period in 2019, footfall was down 45.3% on the first day of reopening in England, according to retail analyst firm Springboard.

Several big brands have been struggling due to the lockdown measures introduced in March to stop the spread of Covid-19.

Cath Kidston, Laura Ashley and the UK arm of Victoria’s Secret have all called in administrators. Last week, Poundstretcher announced that it has launched a company voluntary arrangement, an insolvency process that allows companies to continue trading while pushing through store closures and rent cuts.

Understanding the decision to enter administration

Administration is usually a voluntary process, decided upon by the business owner when experiencing financial difficulties within their company.  Though, this doesn’t indicate that administration is a long-term solution, it normally isn’t. Instead, it often helps to open the door to further options and different future avenues that can be travelled down for a business on the ropes.

The administration process can still mark the beginning of the end of your business if it is found to not be a viable entity by administrators. But, at the same time it can also work out to be a positive process and one that helps to develop your company going forward. This is because it can help to restructure your business model where it most needs it, allowing you to make the changes you need in order for your business to succeed.

Going into administration can be a lengthy process and Real Business go into further detail on how this can vary on a case by case basis. They state that, “The process of administration can last anywhere from a few weeks to up to year or more, depending on the circumstances. However, the administrator is always obligated to perform all duties as soon as possible, so speedy administrations are much more common than slow, drawn out ones. Administrators have a maximum of 8 weeks to send out their administrative proposals (their plans for the company) to creditors.

Is your business heading for administration?

You’ve probably heard of companies ‘going into administration’. If the company is insolvent and facing serious threats from creditors, a licensed insolvency practitioner can be appointed by the court as an administrator. This protects the company from creditor claims and legal action, allowing the business to be restructured or prepared for sale.

Prepack administration has had some bad press in recent years. By nature, it is a closed process and this has the potential to antagonise creditors. When a company is in financial distress, an insolvency practitioner is employed to ready the businesses assets and prepare it for sale as soon as is practical and reasonable after the business formally enters insolvency.

What this means in practice is that by the time that the creditors are made aware of the sale, the sale has already taken place. Hence, from a creditor’s perspective, the ‘done deal’ can be perceived somewhat negatively. If you are a creditor and the money realised from the sale doesn’t cover the money owed to your business, that money will be written off in the deal, regardless. Unfortunately, the prepack process gives you no option to oppose the sale and the process before it takes place.

On the other side of the coin, what this does mean is that the sale of the business is likely to be agreed much more swiftly, which should save jobs in the long run. So, whether prepack is a good or a bad thing can very much depend on which particular side of the process you sit.

Don’t be afraid of the insolvency procedure; it is successful far more often than not. The pre pack administration process may be right for your business, though it may not. It is entirely dependant on the state of your business and the other factors surrounding it at the given moment you need to start considering administration.

If your limited or independent business isn’t faring so well due to the recent events of Covid-19, try not to be discouraged. It may sound confusing, but if you can find some heart in the fact that you’re not alone in your business’ financial struggles and other companies/firms of a wide variety of shapes and sizes are facing the same problems, at least you know you’re all in the same boat.

Go Outdoors will likely face some lay offs in the future, similar to that of Morrisons and Clarks, so if you work for the firm itself, prepare for your own future.

Is go outdoors going into liquidation?

JD Sports buy back Go Outdoors for £56.5m, in a pre-pack administration deal. The sportswear retailer appointed Michael Magnay and Daniel Butters of Deloitte as joint administrators to Go Outdoors yesterday before acquiring the business for £56.5 million via a newly incorporated subsidiary JD Newco. All pre-existing Go employees will transfer across to the new business with their previous terms and conditions of employment preserved.