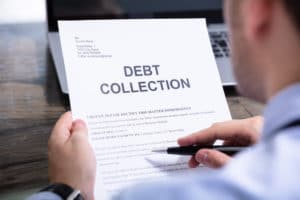 Though all high court enforcement officers, debt collectors and bailiffs all have the same purpose of retrieving a debt on behalf of a creditor, they do have a few key differences that differentiate their professional roles.

Although each of them can visit your home, there are differences between the levels of power debt collectors and bailiffs have in terms of taking goods and entering premises.

What is a bailiff?

Bailiffs  are agents instructed to retrieve debts on behalf of either a creditor or the courts. The amount of power a bailiff has is dependent on what type of professional position they hold.

This position can either known as a high court enforcement officer (HCEO) or a debt collector. All enforcement agents must be fully certified with a Bailiff General Certificate from the county court, otherwise they are not authorised to continue in their proceedings. A HCEO is appointed by the court and collects debts on behalf of the courts. The debts they normally collect include CCJs, VAT income tax, national insurance, court fees and unpaid council tax.

High court enforcement officers (HCEOs) are officials that act on behalf of the courts and they have to be appointed by the Ministry of Justice. These officers possess the ability to enforce orders from the High Court such as CCJs which are over the value of £600.

A High Court Enforcement Officer is a special Category of Bailiff in England & Wales. They are Appointed by the High Court and have the Power to enforce High Court & County Court Judgments. HCEOs are regulated by The Conduct of Authorised Persons Rules 2006.

There are two types of HCEOs:
1) Those who are employees of HMCTS (The Courts and Tribunals Service), known as Officially Appointed HCEOs.
2) Those who work for private companies, known as Authorised High Court Enforcement Agents.

High Court Enforcement Officers are not police officers, but they do have certain powers of arrest. These arresting powers are derived from The Recovery of Debt etc Act 1987 and The Judges’ Rules 1969. The use of these powers should only be used as a last resort where all other attempts to collect the debt have failed.

If you have been contacted by a High Court Enforcement Officer, it is important to seek legal advice as soon as possible, as they have strict timelines in which they must take enforcement action. If you ignore them, they may take belongings from your home or business to the value of the debt, or even send bailiffs.

Someone who works for a debt collection agency and has been employed by the creditor to collect assets equal to the value of the debt is known as a debt collector. Though, you should note that debt collectors don’t actually have any power when it comes to collecting goods. This is why debt collectors are often deployed as a technique by creditors to try and intimidate people into settling their debts.

Also, debt collectors have no right to enter premises, be it business or residential and so they cannot force entry. Forced entry includes the breaking of windows and doors, as well as pushing past an individual when they open their door. If you ask a debt collector to leave your property, they must proceed to do so. This means that if you choose not to open your door to them and decide not to let them in to your building, there is nothing they can do about it.

Enforcement agents have to be fully certified with a Bailiff General Certificate from the County Court, if not, they can only attempt to collect a debt when they are with someone who is certified. Knowing the difference between HCEOs and standard debt collectors is crucial, as they have different powers and can enforce entirely different things.

Debt collections made by HCEOs are on behalf of the courts because they are also appointed by them. They can collect a variety of debts, such as CCJs, VAT income tax, court fees, unpaid council tax and national insurance. That is the majority of what they’ll normally collect, though it can contain more in certain situations.

You should also be aware that debt collectors have to be employed by private companies, that is the policy they abide by. The key difference between debt collectors and HCEO, is that a debt collector has no special legal powers to collect a debt and cannot seize goods without your first gaining consent, whereas an HCEO does have such powers and therefore doesn’t need your consent when acting on behalf of the Magistrates Court.

What powers do they have?

HCEOs work on behalf of the courts and thus they have much greater powers than that of a debt collector. This is because courts grant them legal rights and powers. All debt collectors are hired by private firms, meaning they do not have the same amount of rights enforcement officers have and therefore cannot take items in the way a HCEO officer can.

It is only HCEOs that actually possess the right to force entry into your business premises in situations where they believe there are assets belonging to the debtor. Though, in cases of residential premises visits, the HCEO are not allowed to force entry in any way. They are only granted entry by invitation or unforced entry, which is basically going through an unlocked door or window; they can however force entry if they have previously lawfully gained access.

So, unless they are returning for a second visit with a controlled goods agreement, or they have a High Court Writ of control from the courts, they can force entry.

Before a HCEO attempts entry, you should definitely ask for a full run through of who the creditor is, as well extensive information on the debt itself.

Other debt collectors or enforcement agents have no powers of entry. Even though some may state that you’ll have to pay them, or that you have to let them in, if they can’t supply you with a sufficient amount of documentary evidence from the court, you are completely within your rights to turn them away from your door until they have said documentation.

The main things you need to find out when facing a bailiff are who they are, who they’re here on behalf of, and finally the reasons behind the visit to your business or house. All registered HCEOs are required to carry proof of who they are and will therefore either have an ID card or ‘enforcement agent certificate’. If they do not have this identification with them during their visit to you, they have no right to act against you at that time.

If they simply state they’re a debt collector and have n other means of proving so other than their word, you can ask them to leave. You’ll have no need to entertain them in this case.

Any proof of their identity they show you should have their name, as well as what kind of bailiff they are. This will give you a much better idea of where you stand with them. In order to get this information before they enter your home or business, you can ask them to push the documentation through a letter box or under the door.

You may contact the police if a debt collector refuses to leave once you’ve asked them to.

Although all bailiffs share a common goal within their work, the amount of power and rights they have can differ massively. Standard debt collectors are not acting on behalf of any court and instead are hired privately by creditors. Their powers are very limited because of this, leading to the fact that they are unable to enter into a commercial or individual premise unless invited to do so by the owner. The difference is that a high court enforcement officer will be acting on behalf of the courts, meaning they will have further legal powers than a debt collector.

How we can help you

If you find yourself concerned about bailiffs visiting you, either at home or on your business’ premises, it is vital that you fully understand your rights. Therefore, here at Business Insolvency Helpline, we aim to advise you on the best and most efficient ways of dealing with bailiffs. Though, we won’t stop there, we’ll also attempt to track the root of any the problems causing the bailiff visits and stop the issue at its source.

Previous Post
What are my rights against bailiffs?
Next Post
What is a High Court Writ and how to deal with one?