What is a Zombie Company? 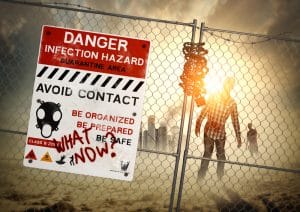 The term zombie company was originally coined by the media around 1990 in Japan; the banks deemed some companies, with large historic debts, too big to allow to fail.

However, allowing such companies to amble along resulted in a market crash in 1990. The term became popular again after the banking crisis in 2008 when interest rates plummeted.

A zombie company is simply a company that is neither dead or alive. In other words, it is in so much debt that any cash generated is being used to pay off the interest on the debt or not actually reduce it.

The company must cut back as much as they can. This means that there is no spare cash or capacity for the company to invest or grow. This means that is unable to employ more staff but on the flip side as long as the company is not actually losing money on an operational basis it does not need to make further redundancies either.

What Is Meant by a Zombie Company?

The definition of a Zombie company is when the company is unable to grow due to high levels of debt, but isn’t actually insolvent and can still service its debt, it’s referred to as a zombie company.

Figuratively, it’s trapped between life and death, unable to move on but unwilling to close down. A zombie company uses the cash it generates to pay the interest on its debts so it’s unlikely that lenders will enforce liquidation as long as this continues. Similarly, if directors have provided personal guarantees for lending, they won’t want the company to enter voluntary liquidation as they’ll become personally liable for any outstanding amounts.

Zombie companies are simply neither dead or alive

However, in some instances, the company will appear to be thriving and its executives will be justifiably proud of this success. But Zombie companies, like zombies in movies, slowly move forward, but only just.

Since they’re only just managing to get by week by week. They can’t hire anyone new and they can’t afford to pay out redundancy, as there’s no cash for a payout. The business stagnates slowly but surely, with sudden growth being as much a problem as a downturn in business.

If you’ve seen any films about these members of the undead, you’ll know that zombies don’t tend to last long. This could be the fate of any zombie company that doesn’t properly address its issues. If you’re paying off the interest on a loan and the interest is suddenly raised, your company can die. If someone business-critical leaves their role for a better job at a company that is enjoying healthy growth and you can’t afford to get someone of the same caliber, your business will slowly die.

Ignoring a zombie company won’t do any good. Unfortunately, they’re often created because businesses ignored signs that all wasn’t healthy in the company finance book. That’s why it’s so crucial businesses get help early on, raising their company back to the land of the living.

If a bank or finance provider has identified a potential zombie company, they are likely to be unwilling to take action against the historic debt, as long as they receive interest payments. Likewise, directors may have provided personal guarantees against these debts, and as a result, they may be dead set against triggering these guarantees by entering voluntary liquidation.

Interest rates remaining at historic lows means that zombie companies are in a position to stagnate. With the Bank of England monetary policy meetings threatening to increase interest rates shortly, a number of zombie companies may be fine this month. However, 28 days later, they may find they have a serious problem.

One of the leading causes of zombie companies in the past has been high interest rates. This can make existing debts so expensive that companies can only afford to repay the interest on the debt. The current record low interest rates make this much less of a factor.

If banks and other lenders fear a company could become insolvent, they will look to retrieve as much of the debt as possible. They will often try to avoid formal insolvency procedures like administration and liquidation, which often provide little creditor return. Instead, they will try to keep the firm trading in the hope it will make a recovery.

HMRC tends to be more tolerant of businesses it knows to be in debt but are doing what they can to repay the money they owe. In this case, HMRC can be open to negotiations to repay the debt, but the repayments can force a company into this state of limbo.

Keep your business alive and kicking

If you start to feel like your liabilities are becoming unmanageable, there are a few things you can do to avoid the zombie trap…

– Refinance the debt – There are likely to be cheaper debt options out there allowing you to make considerable savings on the cost of your interest repayments. A wide range of different lenders have entered the market in recent years to make up for the shortfall in mainstream lending.

Why are zombie companies a problem?

An excessive number of zombie companies negatively affect the economy by causing stagnation. They use up resources that new businesses, or existing companies that are flourishing, could benefit from – space to trade on the high street, for example, or talented staff.

If yours is a zombie company you’re still in business but also in a perilous and vulnerable position. So what can you do to break the zombie stronghold and begin to trade again with purpose

Effects on the Economy

No country wishes to have zombie companies in their economic environment because of their overall lower productivity. This entails the lower growth of the country. They also restrict the growth of the most useful resources. They also acquire a figure out of total market share, and thus, such companies are often called “Uncompetitive Survivors.” Their existence is of no importance to the government of the land.

Since productivity is at a lower level, it also pinches the government with lower tax revenues.

In the time of COVID19, it may happen that many companies come to the situation of being a zombie company. So as to bring the economic stability of the country, the supply chain should stay intact. At these crucial times, the support of the government is very important for the corporate entities (since these entities are employment providers and tax generators for the country). If the residents of the country start using domestic goods and/services, it will help the zombie companies to refurbish themselves.