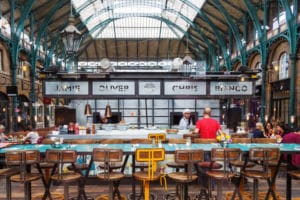 Jamie’s Italian, what has gone wrong? After such a promising start Jamie Oliver’s restaurant chain is collapsing, but what went wrong and can their misfortune provide lessons for other businesses?

It was a good news story which had an unhappy ending. When celebrity Chef Jamie Oliver launched Jamie’s Italian in 2008, he hoped to transform the mid-market dining sector.

Unfortunately, in the last month his restaurant empire has collapsed with all but three of his 25 remaining restaurants closing. The administrators have been called in and more than a thousand people face losing their jobs. So where did it go wrong?

End of the Jamie’s Italian empire

Announcing the demise of his Italian restaurant empire, Oliver claimed he was proud of his staff and that they had achieved their goal of transforming the restaurant market.

“We launched Jamie’s Italian in 2008 with the intention of positively disrupting mid-market dining in the UK high street, with great value and much higher quality ingredients, best-in-class animal welfare standards and an amazing team who shared my passion for great food and service,” he said. “And we did exactly that.”

Things started well. When the first restaurant was launched, the Guardian said that, if he kept up this form, he would be driving a ‘prize herd of recession proof cash cows to market’. His chain had name recognition, it had a mission and it had a ready market of people who were looking for better and healthier cuisine. Even with all those things going for them they couldn’t survive. So, why did it flounder and lessons can we learn?

Early form might have been good, but it didn’t last. A review of the Westfield restaurant in Stratford described a meal as being ‘appalling, a honky, salty swamp of sauce’. They had committed the cardinal sin of all chains: failing to maintain standards across the board. While you might have a very good meal in one restaurant it was difficult to guarantee you’d also have a good meal at another. McDonalds are the masters at this art, maintaining consistent standards at their branches. They understand that a problem in one outlet will harm the reputation of all the others.

Jamie’s Italian might have been fresh and exciting when it started, but things have moved on. Standards have improved and you can now find mid-market restaurants offering good, food and ethical welfare standards everywhere you look. They may well have transformed the market, but the market quickly caught up and overtook them. People could find better food for a lower price elsewhere and this showed in the TripAdvisor Reviews.

Another common complaint is that the restaurants were too big for the number of staff manning them. As one employee told the BBC, they often found themselves being run off their feet and handling as many as 11 tables at the same time. With those workloads it is difficult to maintain standards.

There were also complaints that the leadership teams had not been honest with their workers. The same BBC article explains that, although staff knew things were not as good as they might have hoped, management were still talking positively about the future with plans for refits on the horizon. All of a sudden, though, they were told not to come in and that the locks were being changed. Staff were invited to take part in a conference call where they were told that they were being made redundant.

Oliver’s restaurants aren’t the only ones suffering. The likes of Strada, Byron Burger and Prezzo’s, which all hit that mid-market sector, have also been struggling. Customers are staying away from the middle market. They are downgrading to smaller experiential restaurants which have upped their game or saving up until they can afford something truly exceptional. The people in the middle are getting crunched. The market is changing and people want something different. Jamie’s appears to have been just one of several which were not strong enough to keep up.

Ultimately, the chain’s difficulties were sowed at the start. They relied too heavily on the celebrity appeal of the name, set prices too high and kept staffing levels too low. They were slow to evolve and adapt and failed to take care of the bottom line: finances.

This is what kills businesses of all kinds. They can feel like there is hope, and they can be making bold plans for the future, but if they get to the point where they can’t pay their bills it’s the end of the game. Cashflow is the lifeblood of a business and, if that dries up, the results are inevitable. It may be a sad end to a positive story, but businesses of all kinds should take note and learn lessons.

If you are an owner of a restaurant the is suffering due to training conditions, and would like to talk to someone about your options and the viability of your business.  Simply complete the online enquiry form and someone will call you by return. Unlike Jamie’s Italian administration is not the end!