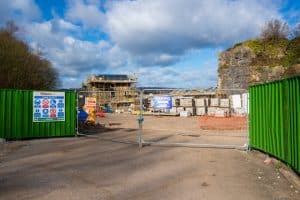 Alfreton based Wildgoose Construction, which was founded in 1896, and was a fourth generation family-owned business has ceased trading and enter into administration.

Wildgoose Construction was a leading building contractor specialising in large-scale projects for clients across a range of sectors, including housing, education, health, commercial and social care.

The firm had recently experienced margin pressure as a result of rising raw material prices, supply chain disruption and labour shortages, which resulted in many of its fixed-price contracts becoming loss-making.

Following a detailed review of the financial position of the company and its trading projections in light of the challenges being faced, the directors took the “difficult” decision to place the company into administration.

Four months ago, the company filed accounts for the year to 30 September 2020, which showed it made a £2m pre-tax loss on turnover of £52.5m. This followed on from a £1.8m loss the previous year on a similar level of turnover.

The company, which was founded in 1896 and worked as a building contractor across the public and private sector, reported cash reserves of £4.6m. It owed trade creditors £7.4m at the end of September 2020; this was up from £6.2m a year before despite little change in revenue and cost of sales, pointing to a lengthening of payment times to suppliers.

In October 2020, the company secured a £1.5m Coronavirus Business Interruption Loan. It was due to start repayments last month.

Wildgoose affected by its clients failures

Wildgoose’s trading was further hurt by other companies going bust. In one instance, a housing client collapsed and, on another project, an M&E subcontractor it was employing went into administration.

Wildgoose was awarded £468,000 in an adjudication in relation to the housing client, and the company had made efforts to secure the payment.

“Unfortunately for Wildgoose Construction, these issues ultimately resulted in a number of its fixed-cost contracts becoming unsustainably loss-making, and when combined with the other unexpected significant one-off costs and liabilities which had arisen, the directors had no alternatives other than to place the company into administration.”

“Our immediate priority is to assist those members of staff who have been made redundant, providing them with the information and support they need to claim their statutory entitlements from the Redundancy Payments Office.”

Jonathan Wildgoose, chairman of Wildgoose Construction, added: “In light of the multiple challenges being faced by the business, our efforts since the commencement of the pandemic have focused on exploring all possible options in an effort to secure a solution which would have safeguarded the future viability of the business.

“It is with great sadness that we had no alternative but to cease to trade and take the necessary steps to place the company into administration. On behalf of all of the directors, I would like to place on record our thanks for the huge efforts of our employee base and all other stakeholders.”