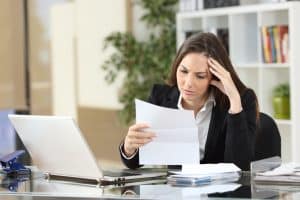 When Limited Companies become insolvent, the company directors are protected from personal liability, this is known as the ‘veil of incorporation.’

The difference between a limited company insolvency and a sole trader insolvency is that sole trader businesses are not regarded as separate legal entities.

Should a sole trader wish to enter insolvency they personally are liable for the debt, so it becomes a personal bankrupcy should you be unable to repay creditors.

Businesses become insolvent slowly as a decline can occur due to various factors, including late invoicing, slow collection of debts, and holding excessive amounts of stock.

Even if you are making a profit, it does not change the fact that there is insufficient cash to sustain day-to-day business operations, and that is often why businesses fail.

A business decline can occur due to many factors, and sometimes alarmingly quickly. Seeking professional advice from an Insolvency Practitioner (IP) is vital as soon as you know there is a problem, because if the business enters insolvency, business and personal debts of the sole trader will be combined and they may have to declare bankruptcy.

Should a sole trader become insolvent there are only two formal routes:

An Individual Voluntary Arrangement, or IVA, is a formal agreement between a debtor and their creditors to repay debts over a fixed period of time and was originally designed for sole traders.

This arrangement is typically used by individuals who are unable to repay their debts in full, but who have a regular source of income and are able to make monthly payments.

An IVA can last for up to five years, and during this time the debtor will make monthly payments to an insolvency practitioner, who will then distribute the funds among the creditors. If the debtor fails to make the required payments, the IVA may be revoked and they may be declared bankrupt.

However, an IVA can offer a number of advantages over bankruptcy, including protection from creditors, the ability to keep your home, and a manageable repayment plan.

A few benefits to an IVA are:

If one of your trade creditors is owed £750 or more, they may have issued a County Court Judgment or a Statutory Demand to recover the debt, if you have not paid or set aside the claim they can petition for your bankruptcy through the courts.

This is sometimes referred to as enforced bankruptcy. It’s a tough decision to make, but sometimes bankruptcy is the best solution for dealing with unmanageable debt.

If you’re considering bankruptcy in the UK, it’s important to understand the process and what it will mean for your financial future.

Bankruptcy is a legal process that allows you to discharge your debts and make a fresh start. Once you are bankrupt, your assets will be seized and sold off to pay your creditors. You will also be subject to certain restrictions, such as being unable to obtain credit or travel abroad.

While bankruptcy can offer relief from debt, it should not be viewed as an easy way out. It will have a major impact on your credit rating and will stay on your credit file for six years. You should only consider bankruptcy as a last resort after you have explored all other options for dealing with your debts.

If you are thinking about declining bankruptcy, this is usually the last resort, but to some it will a relief, bankruptcy can relieve a period of extreme stress and pressure for sole traders, even though personal and business assets are lost.

Completing the bankruptcy process can be a complexed issue, you may with to get an insolvency professional to look over it before you issue your petition to declare yourself bankrupt.

Can a Sole Trader declare Insolvency?

A Sole Trader can declare insolvency but they only have two insolvency options these are either an IVA or Bankruptcy.

A sole trader is personally liable for their business's debts, unlike a Limited Company which is regarded as separate legal entities.

Can a Sole trader loose their house?

Sole traders are liable to loose their house if they are in debt and declared bankrupt.