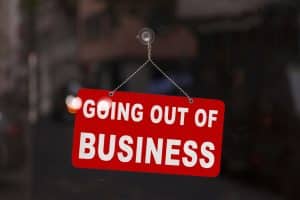 Receivership, was formally known as administrative receivership, this type of legal process is whereby a receiver is appointed by a floating charge holder such as a bank or other lender. The receiver then “receives” any of the assets of the company that it can liquidate in order to pay back the lender.

Receivership and administration are two different processes and should not be confused as a receiver can only be appointed by a holder of a qualifying floating charge that was created before September 2003.

Changes to this procedure were brought in by The Enterprise Act 2002 which promoted company rescue and saving struggling businesses.

What happens when a company goes into receivership?

When a company goes into receivership it means that a creditor (usually a bank or financial institution) with a qualifying floating charge wishes to recover money owed to them, it does the following.

Depending on the insolvency practitioner’s findings, the receivership process can begin quickly, particularly once the bank has the right to exercise ‘power of sale’.

The whole process will be sped up further if the loan agreement contains a provision allowing for the express appointment of a receiver.

Once a receiver is appointed their rights and powers will be guided by Section 109 of the Law of Property Act, as well as any fixed charge provisions written into the debenture itself.

Essentially, the receiver has extensive powers to recover the money owed so will commence whatever actions are necessary to get the job done.

What does it mean when a receiver is appointed?

When a receiver is appointed it means that they will act in the best interests of the creditor to recover back the money it is owed on behalf of the creditor.

If more than one creditor holds a charge against the company, repayment priority will be dictated by the level of the securities.

What does the receiver do?

The  receiver’s job is to act in the interest of the creditor who appointed them to recoup the debt the creditor is owed.

The receiver will assess the business and its prospects to determine whether to:

The receiver will choose the course of action that is likely to achieve the best results for the creditor. Essentially, the company’s fate is in the receiver’s hands – the receiver is not required to seek advice from the directors.

They must pay preferential debts first from any floating charge collections. This may include employee claims for pay arrears or holiday pay. For receiverships that take place after 1 December 2020 preferential creditors also include unpaid VAT and PAYE.

The receiver will also investigate the directors’ conduct and report their findings to the government.

There is no standard timeframe for receivership. In some cases it takes just a few months, while in others it may carry on for several years

There are several disadvantages to administrative receivership, many of which were the driving force behind the government’s decision to remove it as a recourse for creditors with security entered into after 2003.

There’s often no surplus funds after the relevant creditor has been repaid, so the company’s other creditors lose out on their investments. The directors and employees can find themselves without a job very quickly, and an investigation will be launched into the directors’ actions prior to the appointment of the administrative receiver.

The advantages of receivership include that a receiver also has power to act to save the business quickly. The receiver does have powers that enable him to turn the company around should this be the decided course of action. This may be beneficial where the company is profitable but is suffering because of poor management decisions.

Can you stop receivership?

The simplest way to stop receivership is to complete closure of the business to repay its secured debts.

It is possible that the value of the company’s assets is sufficient to cover the level of debts owed, and the business can continue to operate after the receivership. However, this is the exception rather than the rule.

Be aware it is often the case the lender involved may strip out assets to secure their debts and leave the empty shell of the company including employee redundancies for you, the director, to resolve.

Administration will offer a breathing space during which an experienced insolvency practitioner can assess the company situation with a view to weighing up the options and opportunities available to them.

Receivers have a dedicated focus to recover money on behalf of the secured creditor. With the power to sell assets, this can mean that companies, more often than not, end up in liquidation once the receiver has finished.

Previous Post
Leading Corporate Recovery
Next Post
How Long Does it Take to Wind Up a Company?