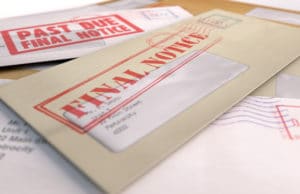 Around 190,000 shops, pubs and other firms have been sued by councils in the past year. This is due to them struggling to pay rising business rates, according to new data

That equates to 750 firms every working day who were taken to court for non-payment of their business rates during the 2018/19 financial year.

Under the Freedom of Information Act, all councils in England were asked to provide details of how many businesses had been summonsed between 1 April 2018 and 31 March 2019.As reported by ITV, real estate adviser Altus Group found that around 190,000 business premises were hauled to court over the non-payment of rates during the last financial year.

The data revealed that 9.8% of all non-domestic premises were issued summons by local councils over business rates arrears. With high streets across the country affected by soaring business rates, rising rent prices and a decline in customer confidence, the shocking figures highlight the current pressures on UK businesses.

Many retailers’ finances are in dire straits and the impact of business rates only makes survival more difficult. “The whole system of how business rates are charged should be overhauled to ensure that the system is fair and the burden is shared by all businesses including those who operate online.”

Figures also suggest that property taxes in the UK, as a percentage of overall taxation, are the highest across the European Union at more than double the EU average.

Is the situation going to get worse?

Altus Group also noted that the situation is likely to get significantly worse over the next year as business were hit with a further increase to business rates in April. Robert Hayton, head of UK business rates at Altus, added that the Government’s reliance on property for tax revenues is too great.

He said: “With 1,255,800 of non-domestic premises actually having rates liabilities to pay, almost one in every six with an actual bill received a summons to appear before a magistrate during the last year. “Major retail and hospitality businesses were reducing their estates and headcount, often citing high level of rates as a contributory factor, whilst other sectors, such as manufacturing, were hurting too.”

He added that a “tax stimulus is desperately needed” to address the issue. The standard rate of tax, which applies to all medium and large premises in England with a rateable value over £51,000, rose by 2.4% to 50.4p for the current financial year. However, a Government spokesperson said ministers are committed to assisting small businesses on the high street and plan to cut business rates by £13 billion over the next five years.

He said: “Our £3.6 billion towns fund announced by the Prime Minister last month will support towns and town centres, allowing them to attract greater footfall, jobs and investment. “This includes making £1 billion available as part of the future high streets fund to directly help high streets adapt to the changes we are seeing in shopping habits.”

Who is Responsible for Paying Business Rates?

It is the occupier of the premises who is responsible for paying rates, not the owner. Of course, the owner may negotiate a rent which includes business rates but unless this has been clearly agreed, it is the occupier. If this occupier is a limited company then the responsibility will lie with directors to ensure rates are paid.

If it’s a sole trader then the responsibility lies with the individual.

You can check with your council if you are eligible for any of the following:

For instance, small business rate relief means you won’t pay any business rates on a property with a rateable value of £12,000 or less and for properties rated between £12,001 and £15,000 you’ll get a reduction.

When you get a second property, you’ll also keep getting any existing relief on your main property for 12 months.

If have concerns regarding the overall stability of your business, then you may qualify for one of our business debt solutions such as administration, liquidation or a CVA.

What Happens if you Don’t Pay Business Rates?

If you don’t pay your business rates, expect to receive an initial automated reminder.

If you don’t respond to that, the course of action taken may vary slightly from council to council, but the common practice is for them to then ask you to pay the entire years rates immediately, as opposed to allowing you to continue via monthly intallments.

You will then likely receive one or two more reminders before the council starts legal proceedings against you.

A standard process of escalation would be as follows:

Has your business been affected?

If your business has been affected by rising business rates or you are feeling the pressure , then please fill out our  Contact Form  and we will be in touch. Our team has extensive experience in dealing with businesses across all sectors and can arrange an initial consultation at no cost, usually on the same day.

Next Post
Mothercare lines up administrators for UK business