Dairy farmers struggle across the UK due to COVID-19 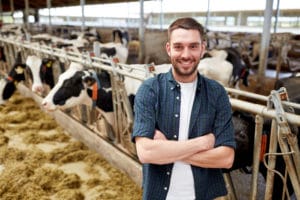 Coronavirus has brought with it many struggles for owners of all different kinds of businesses.

Though, something that people outside of the farming industry may not be thinking about is the knock-on effect all of this is having on farmers across the UK.

Dairy farmers are having to pour away thousands of litres of milk as there simply isn’t the same demand for it at this current moment in time.

All of that waste in a time where we thought we’d be running low on items such as milk seems obscene at first, but when you think about it, there are no cafes or coffee shops open for customers to clamber into and order a milky coffee or a cappuccino. The demand for milk in general has dropped significantly and it is causing a great deal of financial stress for farmers all over the country.

The BBC have reported, “Some dairy farmers are having to throw away thousands of litres of fresh milk due to disruption to the supply chain caused by coronavirus. There is concern that some dairy farms may go out of a business, which could result in a milk shortage when demand returns after the pandemic”.

The dairy farming industry is an essential, pivotal part of the UK, making it a great market to break into if you have the right level of desire for it. It is certainly a stable industry to invest in because people will always view it as a necessity; it is something we all need and something that we will all want to actively support.

The added pressures that the COVID-19 outbreak has brought with it are monumental, and there is no possible way in which all business can be saved from bankruptcy or liquidation. Some will inevitably lose the funding stream that is obviously needed for their doors to remain open to the public.

One industry we all assumed would be safe is that of the farming world in Britain, though we may well be mistakenly unsure of its future. The issues with just assuming certain areas of business are safe without looking into it, is that we really don’t feel the force of the difficulties different areas are facing without standing in the shoes of those within it ourselves.

The Independent writes, “It is estimated around 300 dairy farms, which produce around 1 million litres of milk a day, are being affected by the ongoing crisis”. This a huge number of farms that are being dealt heavy blows from a financial standpoint, which is something that could be painfully difficult for them to turnaround once the UK lockdown comes to an end; we don’t currently know how long the lockdown will go on for, but we imagine it’ll be quite a while longer than we originally first thought.

Could a government bale out type of package be something that could potentially save our dairy farming markets? Yes, it absolutely could be, just as long as they were fully committed to helping and released the funds within a reasonable timeframe to avoid other errors that have been made so far during this global pandemic. The Express have reported, “UK dairy farmers are facing bankruptcy as a result of a huge drop in demand for their products and are calling on the government to provide them with a bale out package”.

Don’t go back on your word

In order to avoid bankruptcies within the dairy farming industry however, the government would have to act with a higher degree of haste in order to see their promises delivering. Unfortunately, up to this point, it has seemed that the government-lead funding schemes aren’t as accessible as many of us first thought they may have been, and many businesses are still seeing their applications denied. According to the British Chambers of Commerce, only 2% of UK firms have successfully secured funding via CBILS, with many struggling with the eligibility criteria, and banks’ insistence on personal guarantees and interest rates.

The UK Prime Minister Boris Johnson made some bold promises a few weeks ago, as he stated small businesses that really needed the help would be able to apply for and receive funds that would help to ensure their survival, as it turns out only a disgracefully low amount have received this company-saving money. A mere 1.4% of applicants have received the funding promised to them by the government so far, which has been shattering news for many business owners that were relying on the aforementioned promises that were previously made to them.

Something like this would be ideal for dairy farmers across Britain, as they’ll be in dire need of help once we get to the other side of this lockdown. If the government can offer any sort of bale out loan or cash advances to farmers in the UK, they’ll see stability being restored into that particular industry and they’ll find themselves with a new found level of respect gained from the public, as we all enjoy seeing our British industry staples supported by whoever’s leading the country at the time.

This would all however, be entirely dependent on whether or not the government would be able to stick to its word and deliver on their promises in a much quicker fashion this time around.

The Guardian have reported, “Tens of thousands of firms are understood to have made formal applications, but amid accusations of excessive bureaucracy and a reluctance among lenders to make loans, only a fraction of them have been given the go-ahead. Sunak has reacted to criticism of slow progress by recruiting former Bank of England adviser Richard Sharp as a consultant with a brief to speed up the processing of rescue loans”.

The economy will only begin to suffer more if our businesses start to close down in a mass way. Companies such as Debenhams, Warehouse, and Oasis have all recently filed for administration, and more ventures of all sizes are unfortunately expected to follow.

Help is needed sooner rather than later

This disease doesn’t choose its targets, it can infect anyone and everyone, and will if we don’t follow the rules and guidelines set out for us by the proper authorities.

It’s a shame and truly heart-breaking for the businesses that won’t survive, but for those that can return, it’s a duty of the public to support them in any way they can in order for our economy to once again be strong and stable. Dairy farming is one such industry that will need lot of help upon its return and it is something we rely on everyday without thinking about it.

Previous Post
How to wind up a small business: our guide
Next Post
Plant growing firms at risk of going insolvent on a massive scale