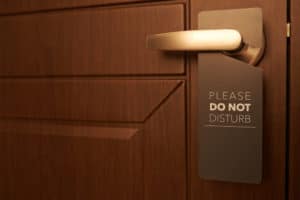 According to the research that was taken out by accountancy firm Hacker Young, insolvencies in the UK-based hotel industry have reached a five year high, up roughly 60% on the previous year.

In 2019 there was 144 insolvencies in the sector, their report suggests, as opposed to 90 in the previous period. This huge jump is notable and may only continue to get worse due to the coronavirus outbreak.

Overall sluggishness in the UK economy may be one of the principal factors, along with a reduced demand for hosting corporate events. Traditionally a good source of revenue, corporate events offer hotels the chance to make money via catering, room hire, and venue bookings.

‘The hotel sector has faced strict competition from Airbnb in recent years,’ commented Company Debt director Mike Smith. ‘Airbnb has been consciously increasing market share within the premium segment, making it a viable alternative to hotels.

In addition, Airbnb has brought with it a cultural shift whereby people now expect all of their home comforts at a relatively low price when they go away. With their much larger infrastructure to maintain, hotels are understandably struggling to compete.’

What challenges do hotels face?

The relatively low figures in 2020 are likely due to governmental measures such as the job retention scheme, which as of December 31, 2020 was paying the wages of more than 1 million workers in this sector.

Under current trends, nearly 2,000 UK hotel companies are expected to go bust over the next three years. The industry is struggling with rising costs from the economic impacts of Brexit while fighting competition from the Airbnb explosion in the last few years. This combination has caused a rise in insolvency and put even more hotels at risk in the near future.

In the US, corporate hotels took matters into their own hands and fought back against the rising threat of Airbnb. They launched a lobbying campaign to take action against Airbnb at state and federal level to reduce some of its power.

Policy changes have been introduced making it harder for users to profit from the platform but Airbnb’s global foundations remain largely untouched. 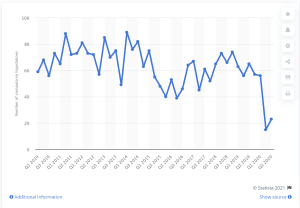 Areas of the hospitality sector in danger

It’s not just hotels but the broader hospitality sector which faces difficulties as we head into 2020. Most city centres are suffering from the cultural shift in habits and spending patterns which have bought some many high profile retail insolvencies into the newspapers.

In addition, the hospitality sector faces staffing pressures due to Brexit, with one in six business owners saying they don’t have the workforce available to cope with the shortfall.

‘With the number of overseas tourists falling by 3% last year, ‘continues Mike Smith. ‘With margins squeezed via higher business rates and a weaker pound contributing to more expensive imports, we should expect this trend to continue for some time to come.’

We can begin to expect the number of hotel insolvencies to increase even further due to the Covid-19 outbreak which continues to affect the world in a monumental way. Hotels will begin to receive much less custom due to the fact that people can no longer freely travel, or have at least been advised against doing so in the UK. While this keeps people safe, it ultimately puts businesses across the country in immediate danger, making it an almost impossible problem to find a solution for.

Businesses within the hospitality sector face an almost unwinnable battle if the government doesn’t change its current standpoint on Coronavirus. Covid-19 is something that has forced people to dismiss social gatherings and the like, for the right reasons, as this will help people that are most vulnerable to the virus. But, on the flip side, the government hasn’t agreed to formally force companies to close, therefore dismissing them from claiming the insurance that would give them a lifeline.

This not only puts many businesses across the UK at risk of permanent closure, but also the thousands upon thousands of staff members that work at them. With no current solution, the future of the hospitality industry is hanging in the balance, almost at the point of collapsing completely.

The BBC report, “Many industry figures have expressed anger that the prime minister advised people to stay away from social venues while not forcing premises to close. This could have given them financial protection for interruption to their business”.

Small businesses are an obvious target for this lack of government protection, as they have no funds for backup in almost all cases. If a small business cannot make sales for even a single week, never mind a multiple month period, it faces the likelihood of having to close its doors for good.

The Guardian says, “Restaurant, pub and bar operators have said the government risks triggering hundreds of thousands of job losses and thousands of closures across Britain unless it provides urgent financial support to the catering industry after Boris Johnson advised the public to stay away from them under new coronavirus restrictions”.

British hotel industry – the statistics you need to be aware of

BDO still claims to have found that the British hotel industry is consistently growing, despite the increased insolvency cases that are hitting it year after year.

They found in their most recent research that, “Britain was coined a ‘staycation nation’ in 2018 as 2017 proved to be another year of consistent growth for UK hotels despite the uncertainties surrounding the exit of the United Kingdom from the European Union. Our Hotel Britain report has been compiled from the responses of a representative cross-section of 649 hotels comprising 53,912 rooms. The results are grouped according to geographic location. We conclude by predicting the key market developments and key trends for 2018. Download the complete detailed analysis, expert commentary and insights into future prospects”.

Restrictions that have come along with the lockdown of countries all across Europe are beginning to be eased, leading to the reopening of some hotels. The hope is to attract foreign tourism once again, sooner rather than later. Not only would getting hotels and other parts of the travel industry back into the swing of things help the economy massively, it would also allow people to take some much needed holidays.

Being locked away indoors for multiple months will have everyone chomping at the bit to escape on a relaxing break, though at first the tourism hotels rely on will have to be solely domestic, of course. As of now, the FCO are advising against all but essential travel, though with the future possibility of air bridges, which could see the UK and other countries come to a mutual agreement over travel, the people of Britain may yet be able to get in on the fun.

Spain, for example, have recently advanced through the first section of their four phase plan, which will attempt to lift lockdown at some point in July. They have even begun to reopen some of their hotels, though it isn’t without obvious new lockdown policies. It will also be a while before the vast majority can begin to have customers, but with tourism being such a financial factor in countries such as Spain, you can expect them to want to get foreign visitors in as soon as they are possibly able to.

The Guardian reports, “Tourism is Spain’s third largest contributor to the economy, making up 12.3% of its GDP, and there is pressure to get hotels to reopen, despite the fact that until July no one will be allowed to travel between provinces. And until borders reopen, airlines start flying and the 14-day quarantine is lifted, there will be no foreign tourists.”

“In the meantime, to ensure health security and help restore confidence, government health-and-safety guidelines have been drawn up for every sector of the tourism industry. For hotels, this means vigorous cleaning and disinfection multiple times a day by staff wearing PPE, as well as changes to the guest experience, such as a ban on buffets”.

With a ban on hotel features, such as buffets, it may leave you wondering what this means for all-inclusive holidays and the like. Well, it isn’t easy to confirm just how they’ll change to continue to offer a worthwhile customer experience, but something in their approach will need to definitely be altered. Holiday goers will still need to be convinced that it’s safe for them to travel and that trips abroad will remain fun and valuable to them. This is likely only going to happen once the first batch of travelers go abroad from the UK and return home safely; this will likely lead the way for others.

What you can do to avoid going into administration

If you’re the owner of a UK-based hotel, then there are many things you can do yourself to ensure you give your business the best chance to survive and thrive in this particular industry.

If you’re the owner of a company that is faced with going into administration, it’s important to know that all is not necessarily lost. You have options and different routes you can take to potentially save your business, or at least soften the blow of the loss of your company. There are different methods of potential business rescue that you can pursue. Distressed business finance maybe one option, it allows a quick inject of cash into the business.

Business Insolvency Helpline is a market leading company when it comes to the insolvency procedure. Their experienced team of experts can guide you through the best options for your personal business situations, so consider contacting them today via their website.

Previous Post
Closing down your business: everything you need to know
Next Post
Working from home during UK lockdown: how to guide