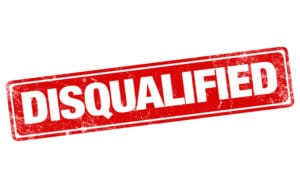 Disqualified Director Should You Be Worried?

Directors disqualification usually follow once a company has gone into liquidation, the liquidator has a duty to examine the company’s books and records to check there are no irregularities.

They will be looking for signs of ‘unfit conduct’ or that as director, you have not met your legal responsibilities to the company.

This could be trading whilst insolvent, not keeping proper accounting records, not sending accounts and returns to Companies House, not paying tax or using company money or assets for personal gain.

The liquidator has to report their findings to the Insolvency Service which, if thinks it appropriate, will investigate.  In some cases, this can lead to prosecution and disqualification, so we take a look at the facts, figures and rationales for disqualification here

What is a director disqualification?

A disqualification for a director will normally follow once a limited company has entered some kind of insolvency process and is carried out under the Company directors Disqualification Act 1986.

The process for directors disqualification whereby a person is disqualified, this is for a specified period, and prohibits the person from becoming a director of a company, or directly or indirectly being concerned or taking part in the promotion, formation or management of a company without leave of the Court.

Once you have been found guilt or you have given an undertaking to the secretary of state in regards to accepting a disqualification period of up to 15 years, this will prohibit you carrying out a number of duties within the future business arena.

The Order applies not only to a person who has been formally appointed as a director. It also applied to shadow directors, and those people who have carried out the functions of a director.

Disqualification proceedings are taken under civil law, not criminal law. A criminal court may also decide to make a disqualification order after conviction for certain criminal offences.

What are the main reasons for disqualification?

Over half of the allegations that get directors banned are in relation to unfair treatment of the crown. This is likely to mean that HMRC was a majority creditor in the insolvency, and that the Insolvency Service considered other creditors to have been paid substantially in priority to any tax debts which had arisen.

It may have also deemed that the company used funds which should have gone towards tax debts to continue trading instead.  In our experience, directors are considerably more likely to be considered for disqualifications for unfair treatment of the Crown if they haven’t paid any tax at all within the 12 months prior to liquidation.

These are the key points that the Department of Business Innovation and Skills (DeBIS) seeks to ban directors on:

The Insolvency Service may investigate your company (or you personally as a director of your company) if it’s involved in insolvency proceedings or if there’s been a complaint.

If they think you haven’t followed your legal responsibilities as a director, they’ll tell you in writing:

You may want to get legal advice if you get a letter about disqualification from The Insolvency Service.

The Insolvency Service or other party, which could include Companies House, will notify you of their intention to begin court proceedings, the grounds for taking action, and the ways in which you can respond. Should you disagree with the evidence they have provided, you are entitled to argue the case in court. Disqualification can last for up to 15 years, and may be accompanied by a prison sentence in the most serious cases.

Apart from The Insolvency Service, other bodies can apply to have you disqualified under certain circumstances, eg:

You have two other alternatives:

Bans and restrictions on disqualified directors are wide-ranging. You may be prevented from being an accountant, solicitor or barrister if your professional body objects. Your eligibility to act as a trustee for a charity or school may also be affected.

Additionally, you would need the consent of The Pensions Regulator to be the trustee of an occupational pension scheme. Disqualification is a public matter. Your details will be available online at Companies House, and for the first three months following your disqualification, you will be included in an Insolvency Service register.

Should the disqualification order or undertaking be breached, you will be committing a criminal offence and could face a prison sentence of up to two years, plus a further period of disqualification.

Personal liability for company debts is also a possibility if you contravene the order. This liability would be for those debts incurred when the contravention took place.

Other people and associates may become involved if you request that they act on your behalf – they would also potentially become liable for company debts and face disqualification and prosecution themselves. This is also the case for the officers of a corporation if one of the directors has been disqualified, and they act on his or her instructions/behalf.

A disqualification can last for up to 15 years, and severely limits who you can work for and in what role. And if you break the terms of your disqualification, you could be fined or sent to prison for up to two years.

If you’re disqualified, you can’t:

In addition to the ban, your details will be published online in the Companies House database of disqualified directors and the Insolvency Service’s register of directors who have been disqualified in the last three months. This listing will include details of why you were disqualified.

Director disqualification is a gruelling process that can have a severe effect on those involved. If you are concerned you might be found unfit, it’s best to seek expert financial and legal advice before proceedings begin.

How many directors get disqualified?

It should be noted that director’s disqualifications are still relatively rare (there are only around 1,000-1,500 per year) however, with a special web site to stop rogue directors www.companieshouse.gov.uk continuing to act illegally and some high profile disqualifications such as the “phoenix four” and the Farepack directors, they are much more in the public domain.

In the early part of this decade Government policy was also beefed up with the introduction of the Insolvency Act 2000 as part of that legislation was designed to speed up the disqualification process and increase the volume of directors disqualifications. In a “fast track” approach directors can admit they have acted wrongly in return for lower penalties.

So, for example, rather than take 3-5 years to proceed with actions by the state and then endure an 8 year ban, the director can elect to admit liability immediately for a smaller sentence like a 3 year ban. This has not really worked since then. The cost of taking action against directors is quite high and budgets need to be cut. So, we understand, part of this plan may lead to even lower numbers of CDDA disqualifications in the years ahead.

Be warned disqualification is a serious business. If you face disqualification proceedings take advice immediately from a well experienced corporate lawyer. It is vital to mount a defence if there are mitigating factors. We have good contacts with a number of law firms that specialise in defending disqualification actions.

Menu
Manage Cookie Consent
To provide the best experiences, we use technologies like cookies to store and/or access device information. Consenting to these technologies will allow us to process data such as browsing behaviour or unique IDs on this site. Not consenting or withdrawing consent, may adversely affect certain features and functions.
Manage options Manage services Manage vendors Read more about these purposes
View preferences
{title} {title} {title}