How to wind up a small business: our guide 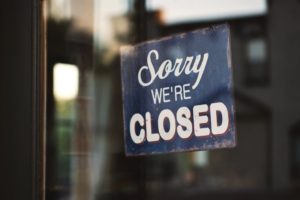 has recently discovered that two out of every five smaller sized companies have already had to at least temporarily, completely close their doors, which may well turn into permanent closures in the not-too-distant future.

The number will obviously shoot up more the further the UK lockdown continues on, as businesses of this size simply cannot remain open with no incoming funds from customers to rely on.

Though, businesses of all shapes and sizes are being hit hard during these strange, unprecedented times, due to the spread of coronavirus. The UK chancellor recently announced some emergency funding packages to aid in the survival of businesses across the country, though many have felt let down by the fact that those promises haven’t been delivered on to a great extent thus far.

Many may argue that the financial support hasn’t come through fast enough or with enough proficiency to make any real, business-saving changes.

Winding up your small business

If you’re the owner of a small business it’s your sole responsibility to seek out the help of a professional as soon as possible if you’re looking to wind it up. A licensed insolvency practitioner will be able to advise you on what is your best option for dealing with your company’s current debts.

What is a CVL?

For the vast majority of insolvent companies, the wind up of a small business involves a process commonly known as a Creditor’s Voluntary Liquidation (CVL). If you choose to liquidate your company voluntarily through a CVL, you can boost the chances of saving your business reputation in the future. Whereas, being forced into compulsory liquidation can show that you’ve dealt with proceedings negatively and don’t follow through proceedings correctly.

How does a CVL work?

A company director can propose a CVL if their company cannot pay its debts, i.e. it is insolvent, and the shareholders agree and pass a “winding-up resolution”. This means that a licensed insolvency practitioner takes control of the company assets with the intention of either repaying creditors or distributing the money realised to shareholders.

Business owners need to understand that a CVL is not a compulsory liquidation, which occurs when a creditor attempts to force a company out of business in order to recover any debts owed to them. Once a company does embark on a CVL it will stop trading and be wound up. A CVL is a formal recognition of your duties as a director to any of the company’s creditors.

The winding up process – what actually happens?

A few things need to have happened before any liquidation proceedings can actually begin for any business. The company in question needs to have stopped trading, and provided the insolvency practitioner they’re working with to sort it all out, with the following things:

It is the insolvency practitioners job to then prepare and sort all forms of documentation that are required for the CVL process to take place and wind up a small business. They will then liaise with any required further parties, such as The Royal Institution of Chartered Surveyors (RICS). In most cases (though it can be dependent on each individual situation) a company will be placed into liquidation within roughly one to two weeks.

The company meetings you must hold

You will need to hold a board meeting which ensures all company directors that a formal agreement has been made to stop all trading within the business. During this first meeting, directors will also likely agree to appoint their selected insolvency practitioner as the liquidator of the company.

As statement of affairs will be prepared so credits and shareholders can see the assets and liabilities of the company.

The second meeting is normally held approximately two weeks after the initial board meeting and can be executed within a short notice period, just as long as enough members agree to this. This meeting would usually be held at the insolvency practitioner’s offices and the company directors must be present once again, this can be done remotely or a physical meeting.

Prior to the meeting, which normally lasts around 15 minutes, the company’s books and records should be provided. When both of these meetings have come to completion, the company will be confirmed as being in formal voluntary liquidation.

The insolvency practitioner will have to keep a check of any objections during the process. As soon as 10% of creditors, who would be entitled to vote at a meeting object, the deemed consent process automatically terminates, and a further physical meeting needs to take place. Though, this is an unlikely outcome in most cases if the first two meetings were successful for all parties.

Since the new rules were introduced

Since the new insolvency rules were introduced, it is very rare that a creditors’ meeting is actually requested, although there are occasionally objections raised to the deemed consent procedure. Though, like we have previously stated in this article, this particular problem doesn’t tend to pop up too often.

Any insolvency firm would have to look into this and other matters relating to the conduct of the directors, as well as the affairs of the company, and are required by law to submit information to The Insolvency Service about the conduct of all those who have been directors, or shadow directors, of the company within the three years prior to liquidation.  This must happen within three months from the initial date of liquidation.

Act while you still can

The COVID-19 pandemic is landing many small businesses in serious amounts of danger and forcing them to take the decision to wind up their ventures before matters get out of control, as this is the best option. With expert advice and support it won’t have to be such a daunting prospect to wind up your small business, and will help you to come to terms with the situation, allowing you to move on to bigger and brighter things in the future.

Previous Post
What Is a Directors Investigation?
Next Post
Dairy farmers struggle across the UK due to COVID-19