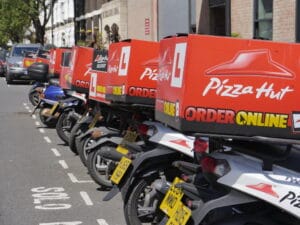 The popular restaurant chain Pizza Hut has announced that it is set to close a large number of its UK-based eateries. It has been stated that 29 of the chain’s 244 restaurants are set to be permanently closed down in the near future.

The unfortunate reality of these closures is that they will result in around 450 job losses, at a time where jobs are exceedingly difficult to find. The UK unemployment rate is once again on the rise due to the closures that have surrounded the Coronavirus pandemic. It should be noted that all team members at the closing branches are set to be made redundant, rather than being moved on to other potential stores.

The MEN have reported that a spokeswoman from Pizza Hut has said, “We are committed to doing the right thing, and in order to secure as many jobs as possible and continue serving our communities, we are working to reach an agreement with our creditors. While we are likely to see 29 Hut closures and 450 job losses, any measures we take aim to protect about 5,000 jobs at our remaining 215 restaurants, as well as the longevity of the business”.

If would seem that Pizza Hut are being forced to close so many of their restaurants in order to keep the UK branch of the company alive and running into the future.

The Eat out to Help out scheme didn’t save everyone

There’s to be a theme of unfortunate closures among multiple Italian restaurant chains in the UK lately, as Pizza Express have also been suffering with large-scale issues of its own. It seems as though the government-made ‘Eat out to Help out’ scheme wasn’t enough to save some of the larger restaurant conglomerates.

It was better served to independent eateries and smaller local businesses as the idea behind it was to obviously get more people going out and helping those businesses, by supporting them with cashflow. The large discounts that were on offer got people flocking to their nearest diners and making a real effort for the first time since the UK lockdown began, to show some support to a local business in the form of a physical visitation.

Pizza Hut were one of the unlucky cases and thus are closing many of its branches in the UK, as we’ve already mentioned.

What next for those that are made redundant?

If you’re reading this article from the perspective of someone that is set to be faced with redundancy, or are suddenly filled with job insecurities, it’s important to assess your options. This doesn’t have to be the end of your career, but merely a turning point. You have different paths you can now travel down, so collect your redundancy pay and contact the relevant recruitment agencies to revitalise your career.

Online recruitment is often a successful way to restart your career. Websites such as Indeed allow you enter keywords of positions you’d like to find and apply for. Having a LinkedIn profile is another way of communicating with potential employers. By using the ‘job search’ feature on LinkedIn, you can view positions relevant to your line of work, allowing you to see what kind of employers there are near your location.

Social media can be a beneficial method of job searching. More job boards than ever before now choose to have a social media presence, allowing them to get a closer insight into the type of candidate they’re looking for. This is why it’s important to keep up appearances across your social accounts. Don’t post stuff on their that you wouldn’t want future employers to see.

Pizza Hut job losses aren’t the end of your career

If you’re about to lose your job because of the closures taking place at Pizza Hut, be ensured that this isn’t the end of your employment journey, rather a mere bump in the road. Keep your CV up to date. The experience gained from the position you’re facing redundancy from will likely be key in gaining your next role at a new company. Glassdoor advises, “Remember that a quality CV is succinct and tailored to the precise role. Be selective about which details to include and then ask yourself: Does this highlight the best of my work and what I have to offer?”

Target recruitment consultancies when looking to reboot your work life. These consultants will be tasked with headhunting new workers and finding ideal candidates to fill a void in workplaces. Try to obtain the email addresses of people such as these and give yourself the insider knowledge that may lend you the upper-hand when talking to recruiters.

You could start your own business venture

The loss of a job, be it through redundancy or otherwise, can often make for a good time to being your own journey into the business world. Choosing to start your own company can be a daunting but exciting time. If you have a passion that you’d like to turn into a career, beginning a new business will come with plenty of perks.

You can be your own boss. You’ll make your own working hours and choose exactly when you need to work hard, or take it a little easier from time-to-time. If your business grows, you’ll be able to find your own employees. You’ll experience being on the other side of the job search fence, discovering the right candidates for your company.

If this sounds like the next move you want to take, you may require a cash advance, or a small business loan. PDQ Funding are a leading business start-up lender and by contacting them today, you may be able to give your new project the boost it needs to lead off in a successful direction.

Pizza Hut has now officially agreed a deal to permanently close 29 of its stores in the UK, meaning jobs are going to be lost with immediate effect. Owners of Pizza Hut have managed to persuade more than enough landlords and creditors to vote in favour of lowering rent costs and billing prices to keep the business afloat, though a Company Voluntary Arrangement (CVA) was voted through, which will ultimately cost 450 separate jobs across 29, soon the be closed restaurants.

The deal that was voted through did have an upside however, as roughly 5000 jobs are now secured for the foreseeable future, unless the company’s situation suddenly worsens further. The remaining Pizza Hut sites seem to be safe for now, though no one can truly predict what might happen with everything that’s going on this year, as it has no become clear that the pandemic will continue on into 2021.

A spokesperson for the restaurant chain has said, “The Company Voluntary Arrangement (CVA) for Pizza Hut Restaurants, (PHR – the UK dine-in franchise business of the global Pizza Hut brand), is now approved. We are delighted to have reached such a constructive position in partnership with our landlords and creditors.”

They continued on by stating, “We appreciate the support of everyone involved and this outcome provides us with a strong platform to secure the long-term future of the business including over 5,000 jobs and over 200 restaurants. Our focus is now ‘business as usual’ supporting all of our team members and continuing to provide a Covid-safe restaurant experience for our guests”.

It is true that difficult times aren’t showing any signs of clearing up within the UK hospitality industry, what the future holds is uncertain, though looks rather bleak from this point onwards. Here’s to hoping things get better and the people that have unfortunately lost their jobs, can once again gain employment in the near future.

Do you own a business that’s heading towards administration?

You’ve very likely heard of companies ‘going into administration’. If the company is insolvent and facing serious threats from creditors, a licensed insolvency practitioner can be appointed by the court as an administrator. This protects the company from creditor claims and legal action, allowing the business to be restructured or prepared for sale.

Previous Post
Bounce back loans – are they really the savour they’re made out to be?
Next Post
How do I resign as company director and remove myself from company records?